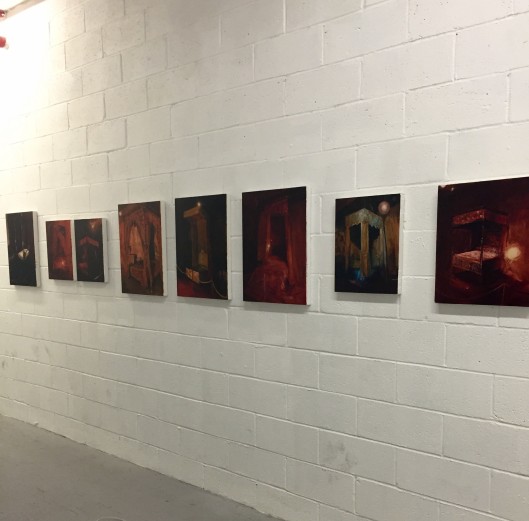 Torrance Shipman Gallery is pleased to present It Follows, a group exhibition that considers artistic strategies of narrative fragmentation. In an increasingly mediated world, the purposeful reduction or elision of legibility may seem like a counter-intuitive move, however as the artists in this show demonstrate, this type of work requires a slower, more sustained kind of looking, thus combating the manic pace at which we have become used to consuming media. Working across a range of media and styles, these artists create works that in different ways hint at a latent narrative thread, implicitly inviting the viewer to take part in their completion. Through these imagined journeys, which transport the viewer across continents, throughout time, and even into mythical worlds and alternate realities, common threads emerge—most persistently a constant searching for understanding that is seemingly just beyond reach.

Peter Fankhauser considers new media as a space for the persistence of unsettled histories and shifting contemporary mythologies. He received his MFA at CUNY-City College in 2012 and has shown at domestic and international independent and alternative spaces, including Judson Memorial Church, The Silent Barn, and the Meltdown Festival. Peterfankhauser.com.

Irena Jurek was born in Krakow, Poland in 1982. She recently had a solo exhibition with Jeff Bailey Gallery in Hudson, New York, and with Zurcher Gallery, Paris. Her work has been included in group exhibitions in New York at Know More Games, 247365, Denny Gallery, and others. She received her BFA in 2004 from The School of the Art Institute of Chicago and her MFA in 2008 from the Cranbrook Academy of Art, Michigan. She lives and works in New York.

Nathan Catlin (b.1984) is from California and lives and works in Brooklyn, NY. He received his MFA from Columbia University and mainly works with narrative using drawing, painting, and printmaking in order to explore morality, cause and effect, and the human psyche. His work has been exhibited nationally and internationally including New York City, Los Angeles, Berlin, and Bejing. He currently manages the printshop at the Leroy Neiman Center for Print Studies at Columbia University where he also acts as the current master printer and adjunct professor of art.

Jordan Rathus (b. 1983 in Princeton, New Jersey) recontextualizes storytelling formats such as narrative film and reality television to humorously and critically examine our collective contributions to pop culture. She earned her BFA in Film and Television Production from New York University in 2005 and her MFA in Visual Arts: New Genres from Columbia University in 2012. Solo and group exhibitions and performances have been held at venues such as The Jewish Museum, New York, NY; Hudson Valley Center for Contemporary Art, Peekskill, NY; Art  Institute of Malmo, Malmo, Sweden; and Upfor Gallery, Portland, OR. Rathus lives and works in Brooklyn, NY and  is a lecturer in Media at Mason Gross School of the Arts at Rutgers University.

Nat Ward (b. 1983) works with words and photographs to explore participation in a culture that systematically discards everything it creates. Working primarily with large and medium format film cameras to slow and expand a dialogue his subjects, he combines the resulting photographs into lyric essays, books, and sprawling multi-image narrative installations. Ward’s work has been recently shown at Orgy Park, Violets Cafe, The Jewish Museum, and Untitled Gallery in NY, Visura in Guatemala City, and at the International Photography Festival in Tel Aviv. His collaborative online photographic project, A New Nothing, will be featured in the Winter 2015/16 issue of the British Journal of Photography. He is currently an artist in the Sharpe-Wallentas Studio Program and lives in New York.

Joanna M. Wezyk holds MFA degrees from the School of Visual Arts, New York and the Academy of Fine Arts in her hometown of Krakow, Poland. She has been exhibiting her paintings worldwide since the mid 1990s, most recently at Tina Kim Gallery, New York. Wezyk teaches Painting, Drawing and the Digital Fine Arts at Kean University, Union County College, and BRHS in New Jersey. Joannawezykart.com